Following my evaluation of the recent Santa Elina potential find of glacial era artefacts in South America, @CDWren asked me about the claim of 18 000 year old material at Monte Verde. The short version is that I think the material from Monte Verde is convincing until about 14 000 years ago. Beyond that, it is suggestive. Let’s look at some details from Dillehay et al’s recent PLoS One paper.

As with Santa Elina, we see a very well excavated, tightly controlled, chronologically, sedimentologically, impeccable site. As with Santa Elina, the problem is not where the material is, or when it is from, or what it is associated with (all crucial archaeological questions). The problem is whether the material is archaeological at all. A recurring pattern with these very ancient occupation claims is that the material becomes more and more ambiguous, more suggestive and less convincing, as one travels down the stratigraphy. The Monte Verde I (MV-I) location is a classic case of this. 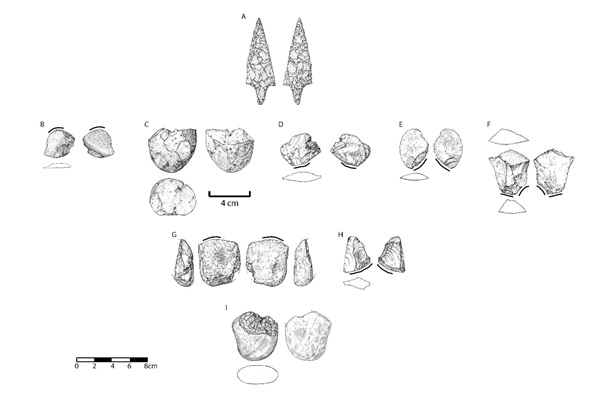 The visuals are eloquent. Figure S7 of the supplement file, reproduced above with its accompanying caption, shows a beautiful projectile point from a layer dated around 10 6000 BP. The rest of the material, dated before 14 500, is very ambiguous. It consists mostly of the usual eoliths. My first reaction on seeing this material is that I need to see the material that was NOT identified as artefactual. In other words, I need to know, statistically, in a Barnesian sense, how this assemblage differs in its attributes from the material from which it was plucked. It could absolutely have been modified by humans. Based on the material presented, I have no doubt that it is a possibility that humans occupied MV-I 18 000 years ago. But I know that humans occupied MV-I 10 600 years ago. The difference is significant.

The progression in the language mirrors the figure. It is also increasingly equivocal as one goes back in time (that’s a good thing). In the Chronology section, on page 11 of the paper, we learn that there is a “Paijan-like projectile point” that is around 10 600 years old. Nice find. Not surprising. We learn that in units dated between 15 000 and 14 000 years ago, there is a “percussion flake”. This is a much less inspiring and more equivocal description. By the time we get to 16 000 years ago, we find “flake spalls, percussion flakes, and exotic clay”. The use-wear analysis performed on some of the older objects, while interesting, is not particularly helpful. It shows nothing that I would call diagnostic, and there is no claim of such in the supplementary material. In every case, appropriately, the use-wear traces are said to suggest given activities. The progression from projectile point to flake spalls doesn’t inspire confidence in the claim that there is human occupation at 18 000 years ago.

Perhaps the best evidence of pre-14 000 BP occupation at MV-I comes from possible grinding stones from which pollen samples were recovered. According to the report “The large quantity [of Typha pollen] could easily represent grinding of cattail seeds”. It certainly could. It could also easily represent any number of natural phenomena. Is there a way to tell the difference? I hope so.

Evidence of combustion, even in localized pockets is not in itself evidence of human activity. In the absence of well-structured hearths, and in the absence of a sense of how the carbon signal at the site compares to the regional environmental fire record, there is nothing much that can be said about this line of evidence.

There are many interesting potential indicators that there were people at MV-I before 14 000 BP. Taken as a whole, the early material at MV-I certainly does not reduce my level of confidence in an 18 000 year old occupation. In fact, it slightly increases it. But there is nothing that forces me to conclude that there is an older occupation. On the basis of what I have seen in the published record, I know that there are humans occupying MV-I around 12 000 years ago, and given the accepted timelines for initial occupation of the Americas, that is stunning in itself. If I had to quantify my prior probability of pre-14 000 BP occupation at MV-I, I would call it about 20%. That’s still pretty good. Plenty of reason to keep looking.

I strongly sympathize with Dillehay and colleagues. There are many things that I know about the sites I have excavated and the places I have surveyed, but that in the current state of work I could convince absolutely no one else of. My current and former students will no doubt relish in confirming this. There are many other things which I know and which I can get others to see suggested by the evidence. And then there are precious few other conclusions I can draw that are clear to all. That’s archaeology in a nutshell, and probably a bunch of other disciplines as well.

If there is indeed occupation in that region at 18 000 BP, then we must consider that there is occupation at 60 000 BP, and we have to start looking at Australia-like scenarios. We’re not there yet, but we’re no longer at the stage of rejecting it out of hand.

One thought on “Is there an 18 000 year old occupation at Monte Verde?”